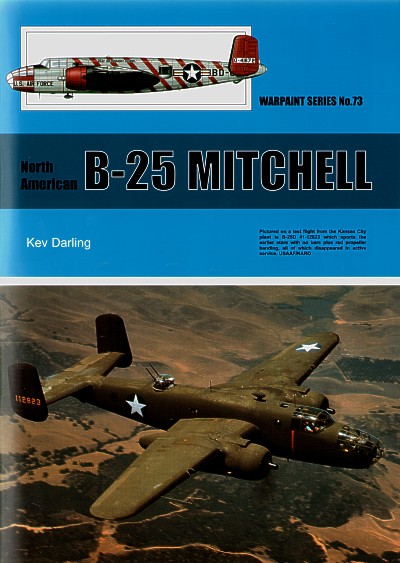 North American B25 Mitchell (Hall Park WS-73)
€ 15.55
EU: incl. tax € 16.95
Reduced shipping charge may be applicable depending on country of destination and contents of shopping cart. Will be shown before checkout.Add to cart

This product was added to our database on Sunday 25 October 2009.

The North American B-25 Mitchell was one of the most successful medium bombers and attack aircraft developed during WW2. Starting with the rather pedestrian NA.40 the NAA design team soon arrived at the familiar shape of the Mitchell. With America's intervention in hostilities growing the B-25 soon found itself in world wide service with USAAF except in Britain where its contemporary the Martin B-26 Marauder held sway. Before the United States was in a position to begin its campaign to reclaim the Pacific they undertook the daring Doolittle raid against the Japanese home islands, while this was not responsible for much damage the propaganda affect was unquantifiable. The spread of the Mitchell saw it giving sterling service in the Pacific where many modifications, some unofficial, improved the types capabilities. It also had another advantage in that it was an easier to re-arm and maintain, this being an advantage on some of the rough airfields that the B-25 units called home. In the Mediterranean theatre a similar set of circumstances applied although those in warmer climes did not have to contend with the eruptions of Mount Vesuvius which caused some grief.

Outside of the USAAF the Mitchell was utilised by the US Marine Corps who used them with great efficiency, the Royal Air Force which used them for missions over Europe and many others especially the Latin American nations. Written by Kev Darling this latest Warpaint covers all versions of this versatile bomber and is illustrated in colour by Richard J.Caruana. Unique 1:72nd scale plans are also included as well as lists of airforce and unit use plus production details.