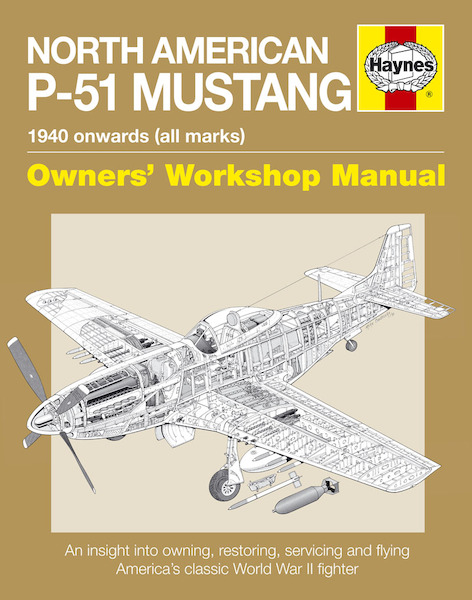 Share this product
Also in this series:
9780857338594HaynesBooks on aviation / WW2 US Aircraft
Product description

The North American P-51 Mustang holds an important place in US aviation history as its finest fighter aircraft of all time. During the Second World War it was the only Allied fighter capable of flying to Berlin and back from Britain without refuelling. Read about the Mustang's illustrious combat history and take a close-up look at how it is constructed. Discover what it takes to own and fly this classic fighter, and find out how engineers keep it airworthy. Centrepieces of this manual are co-author Maurice Hammond's Second World War-vintage Merlin-engine P-51Ds - Janie and Marinell.

Fast and manoeuvrable with an unprecedented long range, the North American P-51 Mustang made a late appearance in the Second World War. Fitted with the Rolls-Royce Merlin engine it became the high performance thoroughbred fighter that helped the Allies out-class the Luftwaffe in the crucial air battles over Europe in 1944-45.

A wealth of contemporary and historical photography alongside technical illustrations, including the renowned Haynes cutaway drawing, give a vivid and comprehensive introduction to this legendary WWII thoroughbred.

Centrepieces of the North P-51 American Mustang Owners' Workshop Manual from Haynes are the pair of P-51D Mustangs, Janie and Marinell, which are owned and operated by the book's co-author Maurice Hammond. Marinell is a genuine Second World War combat veteran of the USAAF's 339th Fighter Group.

Inside the manual you can see a rare and fascinating photographic record of these ground-breaking restorations as well as read about the Mustang's illustrious combat history, and take a close-up look at how North American Aviation's classic fighter was built. You can also discover what it takes to restore and fly a Mustang and find out how engineers today keep surviving P-51s airworthy.

The North P-51 American Mustang Owners' Workshop Manual is fully illustrated with stunning archive photographs of the P-51 Mustang in action, as well as technical illustrations from North American's wartime engineering manuals, and images of those beautifully restored featured P-51D Mustangs in flight.

Fascinating insight into owning, restoring, flying and maintaining a classic Second World War fighter aircraft.
One of a handful of iconic aircraft that is known worldwide.
Features restored-to-flight P-51Ds Janie and Marinell.
Rare and exclusive photos of rebuilding Janie and Marinell.