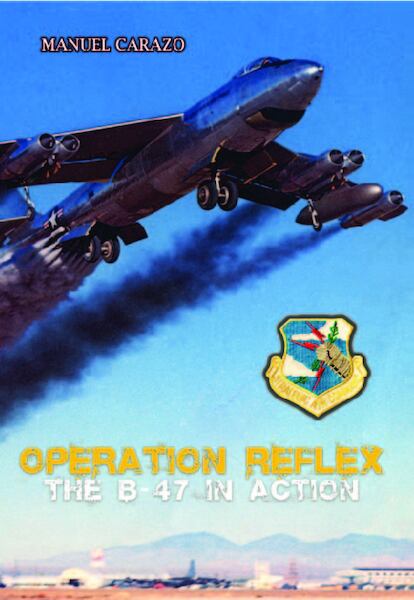 This product was added to our database on Friday 12 february 2021.

On October 1st, 1957, the Strategic Air Command commenced an overseas alert operation, called Reflex Action, with twenty B-47 nuclear-capable bombers deployed to Sidi Slimane Air Base in Morocco. This number would greatly expand over the course of the operation and include many more bases, including Torrejon, Moron and Zaragoza in Spain. Reflex operations would rotate bomber and refueling aircraft and crews to overseas bases where they would be disbursed away from CONUS and be within striking distance of their targets. The Reflex mission ended on March 31st, 1965
Reflex missions proved the long-endurance (eighteen hours) and long-range capability of the B-47 and aircrews. These were simulated strike missions against the then Soviet enemy
The B-47 was the first line of America's strategic nuclear deterrent, often operating from forward bases in the UK, Morocco, Spain, B-47s were often set up on one-third alert, with a third of operational aircraft available sitting on hardstands or an alert ramp adjacent to the runway, loaded with fuel and nuclear weapons, crews on standby, ready to attack the USSR at short notice. Crews were trained to perform Minimum Interval Take Offs (MITO), one bomber following another into the air at intervals of as little as 15 seconds to launch as fast as possible.