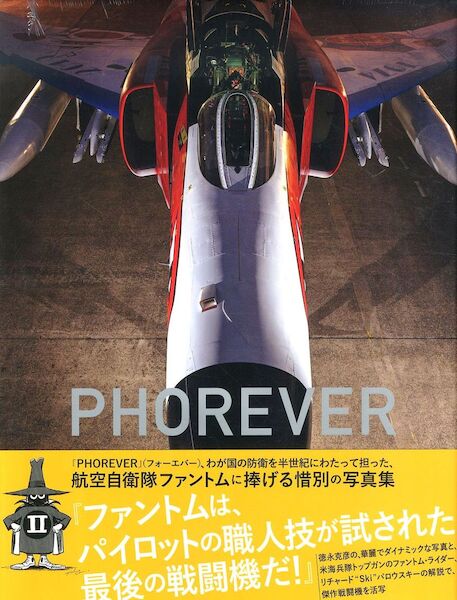 This product was added to our database on Monday 21 June 2021.

"PHOREVER" is not just a special high-end glossy aviation "coffee-table"
or "reference" book on the F-4EJ & F-4EJ Kai compiled from the best, most dynamic and meaningful airborne pictures taken by Katsuhiko Tokunaga himself, but the book serves as a glorious salute to all those men and women in over a dozen air forces around the world who flew, maintained, and supported the beloved and feared F-4 "Phantom II."

Sadly, because the F-4 Phantom now has become history all around the world passing out of the mainstream operational air force inventories.
This final sortie into retirement is beautifully recorded in "PHOREVER"
showing clearly how the Japanese Air Self Defense Forces adapted such a dignified & honorable way to do this retirement with each Squadron as they ended their "Phantom Experience."

An emotional expose by Shinichiro "Tiger" Toda, retired Colonel JASDF, one of the highest F-4 flight time pilots and former Officer Commanding, 306th Squadron, serves as a proper introduction setting the stage for a sober time in the hearts and minds of so many dedicated personnel who gave the best years of their lives to the F-4 Phantom as they served their Air Forces and countries.

The F-4 experience with the Japan Air Self-Defense Force spanned a very intense period of half a century that also saw the Phantom as a critical transition platform from the 3rd to 4th generation fighters and because of so many high-tech extensions of the Phantom's service life its capabilities enabled it to be a transition platform also to the present 5th generation fighters. Another remarkable feature that burns in the legacy of the world's greatest fighter.

For those of us who lived with and flew the Phantom on a daily basis our experience with the jet covered the main thrust of our lives, or precious youth and it was the instrument by which we served our armed forces and in reality, it was what we lived for.á We risked everything with every sortie as we sought excellence with a jet fighter that demanded it.á Weak pilots and aircrews could not excel in combat with the F-4, to be great with the F-4 you had to be great in your own professional competence and warrior spirit ľ in essence it was the true Samurai's fighter plane ľ no regrets and never second place.

It was quite "a time to be flying" and definitely quite "a ride" but it also was a soul wrenching series of experiences that tested us over and over.á Without the seed of a military trained mind that resisted everything that doesn't make sense and despising of all forms of rules from those unworthy of our respect, we too would have been sprouting up
flowers at some national cemetery.á áAll of us who knew the Phantom
personally are here now and we can reflect on all that we have shared with the greatest jet of all times.á We at times may have been all "wrong" in our outlandish behavior at the Officer's Club but what we were doing in brandishing squadron comradery was for all the "right"
reasons keeping the warrior ethos vibrant and alive, very much real for all of us to cherish and emulate ľ hell it was all we had, let's face it.á How else could you get up at 04:30am and start zipping up a G-suit, walk out to that beautiful beast and really feel that things couldn't get any better.