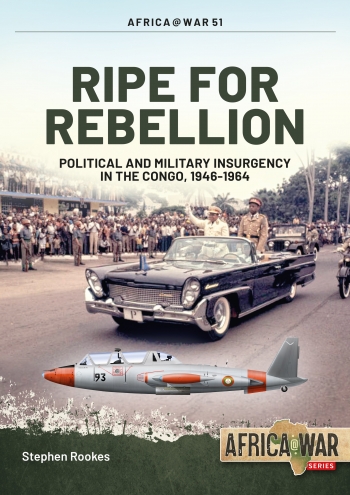 Ripe for rebellion: Political and Military Insurgency in the Congo, 1946-1964

After many years of political struggle, the Belgian Congo was finally granted its independence in June 1960.

Becoming the Republic of the Congo (and later the Democratic Republic of the Congo), what was supposed to be a momentous occasion in the country's history was rapidly transformed into a bitter internecine political battle which would tear the Congo apart. Within weeks, two Congolese provinces had declared their own independence putting the Congo's economic future in jeopardy.

Recruiting hundreds of white mercenaries to sustain its secession, mineral-rich Katanga then attempted to fight off all attempts to bring it back into the fold. By early 1963 the mercenaries had been forced to leave by the UN, but other major outbreaks of armed protest against the Congolese government were taking place. The most significant of these were the Stanleyville, Kindu and Kivu Rebellions led by supporters of Patrice Lumumba, the former Prime Minister assassinated in January 1961.

With the Soviet Union, the Republic of China and radical African governments all aiding rebel movements, what was a series of localised conflicts became a proxy war between the East and the West. Not wishing to see the Congo fall under what it perceived as 'communist domination', the United States then began to provide its own form of military assistance to government forces.

Ripe for Rebellion is the first of two volumes examining the so-called 'Congo Crisis'. Based on extensive research in multiple official archives, it throws entirely new light upon developments in a country which many US citizens of the time believed would become the next major battlefield of the Cold War. Richly illustrated, it provides a detailed account of the global and local political dynamics which led to civil war and encouraged so many to take up arms, and an intricate reconstruction of the military role played by the United States from 1964. The story told in Ripe for Rebellion will be continued in For God and the CIA, though each volume stands alone.