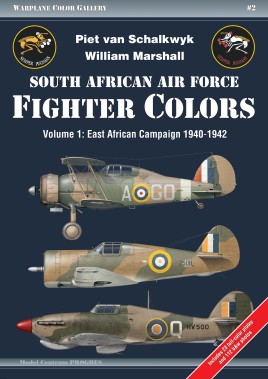 This product was added to our database on Wednesday 5 June 2019.

In the early stages of World War Two, the Italian Forces in Abyssinia, East Africa, consisting of 200,000 troops and nearly 400 aircraft constituted a grave threat to Kenya and the Sudan. To meet this threat three South African Air Force (SAAF) fighter squadrons were deployed to East Africa to counter the attacking Italian Air Force. The three squadrons operated mostly old and antiquated bi-planes in the form of Hawker Furies, Gloster Gauntlets and Gloster Gladiators. Between then they did also operate a number of Hawker Hurricane Mk. Is, of which some still had fabric wing surfaces and two-bladed wooden propellers. These aircraft were also passed along between the various units, depending on the area that had the highest requirement. Among the three squadrons, 1 Squadron primarily used Gloster Gladiators, while 2 Squadron used Furies and Gladiators, with 3 Squadron being the primary users of the Hurricanes. These units were joined by 4 Squadron, training on Furies and Curtiss Mohawks, before moving to Egypt for operations in the Desert. 3 Squadron later converted to these Curtiss Mohawks, and eventually ended up with a mix of Mohawks, again supplemented by Gladiators. 41 Squadron, an Army-Cooperation unit, also converted to a fighter squadron after the major campaign was completed and served as a holding unit in East Africa, flying Hawker Hurricane Mk. IIs. One Detached Flight, operating Mohawks during the final part of the campaign, was renumbered as B-Flight of 3 Squadron and joined the primary unit for the last major operations in East Africa. The squadrons operated on all fronts in Somaliland and Abyssinia, and made a considerable contribution towards the victory that was achieved in that campaign. Commenting on the part, that the SAAF Fighter Squadrons played in the campaign, Sir Archibald Sinclair said: "When the Italian come to draw up a list of the factors that caused them to lose the East African Empire, they will place the South African Air Force somewhere near the top of the list".

This volume covers the combat history of these fighter squadrons during the campaign, as well as the colors and markings of their aircraft. Primary sources, such as Squadron war Diaries and Pilot Logbooks. were used in the preparation of the text contained herein. This volume contains 23 full-color plates and 112 b&w photos, indicating the people and aircraft operated by these squadrons.

This volume will be followed by two further volumes, tracing the onwards history of these squadrons as well as additional SAAF Fighter Squadrons during the campaign in North Africa and Malta, and the campaign in Sicily, Italy and the Balkans.

The authors have already written eight books covering the colors and markings of the SAAF and SA Army equipment in a series of booklets entitled South African Colours and Markings, numbers 1 to 8.