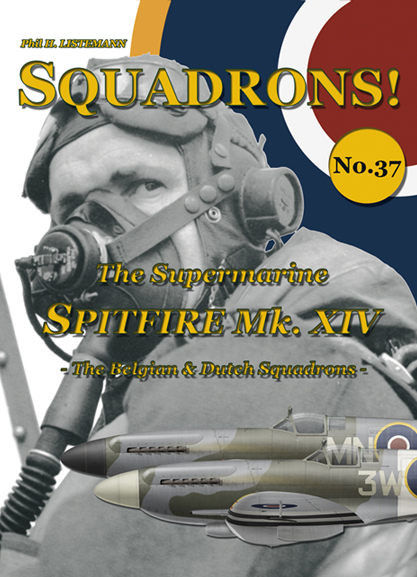 Squadrons! No.37: The Supermarine Spitfire Mk XIV – The Belgian and Dutch squadrons (RAF in Combat 9791096490585)
€ 15.55
EU: incl. tax € 16.95
Reduced shipping charge may be applicable depending on country of destination and contents of shopping cart. Will be shown before checkout.Add to cart

This product was added to our database on Wednesday 1 January 2020.

The Spitfire XIV was the logical development of the Spitfire Mk XII (see SQUADRONS! 5). The Mk.XIV differed from the Mk.XII in that the longer, two-stage supercharged Griffon 65 was mounted further forward. A new five-bladed Rotol propeller was used and was the most obvious visual difference compared to earlier marks. The first batch of aircraft to fly with the Griffon 60 series engines were six converted Mk.VIIIs . The first one of these was flown on 20 January 1943, with production ordered following a series of trials. The first aircraft left the production line in October 1943 following the amendment of existing Spitfire contracts. The XIV was initially seen as an interim design pending the Spitfire Mk.XVIII's availability. Delays with the XVIII meant the XIV became one of the major Spitfire fighter variants and a valuable asset for the RAF during the final year of the war. The XIV was built as a fighter, but was also developed for fighter-reconnaissance (FR) to replace the effective, but ageing, Mustang in the Tac/R role. The mark remained in service with the RAF and various foreign air forces, including Belgium, well after the war. During the war only a limited number of squadrons were re-equipped with the type and among them, one Belgian squadron (350) and one Dutch squadron (322). This book covers the operational usage of the Spitfire XIV by those two units which were engaged against the V-1 and with the 2 TAF. This book is illustrated with about 35 photos and five colour profiles.