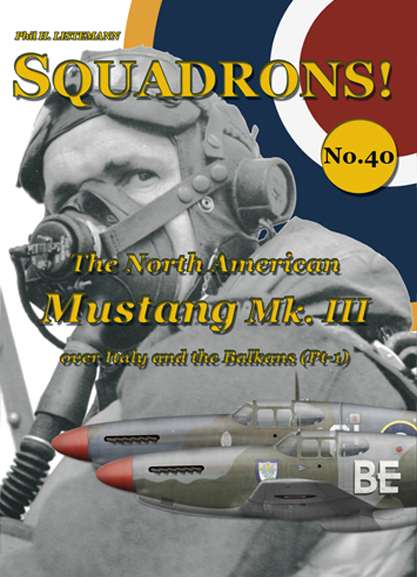 Squadrons! No.40: The North American Mustang III over Italy and the Balkans (Pt-1) (RAF in Combat 9791096490646)
€ 16.47
EU: incl. tax € 17.95
Reduced shipping charge may be applicable depending on country of destination and contents of shopping cart. Will be shown before checkout.Add to cart

This product was added to our database on Wednesday 20 May 2020.

The North American Mustang is certainly one of the legendary fighters of the Second World War. The aircraft can be split into two 'families', the Allison-powered and Merlin-powered. The RAF Marks I and II belong to the first category, while all subsequent marks belong to the second. The change of engine made the aircraft perform far better at higher altitudes. The Merlin 61 (with the two-stage supercharger) provided significantly improved results above 15,000 feet and was without compare above 20,000 feet. All this without sacrificing range. This was a key point as, in 1942, the RAF was looking for a long-range escort fighter, a role the Spitfire, whatever the mark, could not fulfill with complete satisfaction from the British Isles. The British conducted an experimental programme with the new engine on various test-beds (known within the RAF as the Mustang X) while the Americans were doing the same thing on their side. The Americans first discovered the best way to pair the Merlin and the airframe and, after the first flight of the XP-51B on 30 November 1942, the future of the P-51B was guaranteed. The British ordered hundred of Mustang IIIs (denomination given to both P-51B and P-51C) and they served in Western Europe and in Italy. In Italy up to May 1945, six squadrons were totally equipped with the type, No. 3 RAAF, No. 5 SAAF, and RAF 112, 213, and 249 Squadrons, while, just after the war, other units (RAF 250, 260, and the Australian 450) received a mix of Mustang IIIs and IVs. This first part will develop the operational usage of the dominion units (3 RAAF, 5 SAAF, 450) and the 'gift' units, 249 (Gold Coast) and 250 (Sudan) Squadrons. Close to 40 photos and 6 colour profiles illustrate this part. 40 pages