The Douglas A4 Skyhawk US Navy, US Marine Corps and Foreign Versions - A Comprehensive guide (Scale Aviation Mag. 9781999661618) 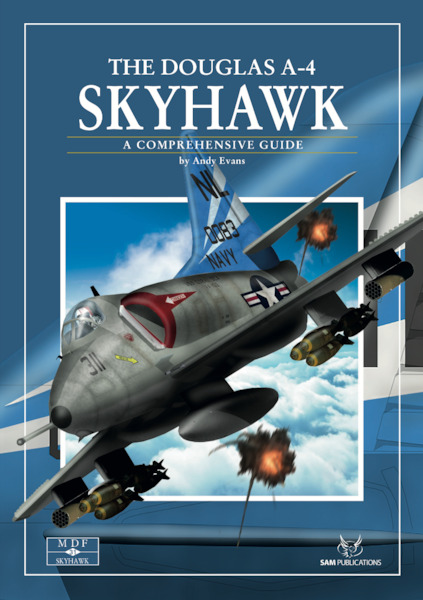 This product was added to our database on Friday 4 January 2019.

The A4D/A-4 Skyhawk is without doubt one of the more successful military aircraft of the post-War era. It entered service with the US Navy in late 1956 and served with distinction for many years, bearing much of the early action in carrier-based strikes against North Vietnam during the 1960s. The Skyhawk was in continuous production for over twenty-seven years, and although the A-4 is no longer serving with the US Navy and US Marine Corps, a few examples are still operational in foreign hands, and private defence contractors. Douglas built 2,960 Skyhawks between 1954 and 1979, and this small yet effective aircraft packed a mighty punch and these lightweight, high-speed bombers was affectionately nicknamed 'Heinemann's Hot Rod', the 'Bantam Bomber' and 'Scooter'. Upgraded models had improved engines and a drogue parachute, new avionics displays, larger cockpit canopies and more ammunition for the two cannons, and the two-seat trainer versions included the TA-4F and TA-4J series. As noted, its combat career began with the first American carrier-launched raids on North Vietnam, August 4, 1964, and during Israel's Yom Kippur war in 1973, Israeli Air Force Skyhawks provided much of the short-range striking power on the Sinai and Golan Heights fronts. Skyhawks were also in action against British forces during the 1982 Falkland's conflict, where they paid a heavy price against the Sea Harrier. The Navy's 'Blue Angels' fight demonstration team flew the Skyhawk from 1974 to 1986, and Skyhawks were also used by the armed forces of Australia, Kuwait, Singapore, Indonesia, Malaysia and New Zealand. An additional role undertaken by the Skyhawk was that of 'aggressor aircraft'. During the Vietnam War, it was found that the air-to-air kill ratio against North Vietnamese fighter aircraft was too low. In an attempt to improve this, the Navy Fighter Weapons School - better known as 'Top Gun' - designed to train pilots against Soviet-bloc aircraft, adopted the Skyhawk and when its avionics and weapons systems were stripped out it proved to be an extremely agile aircraft, and one which could simulate the performance characteristics of the MiG-17. The A-4 Skyhawk remains one the iconic designs of the Cold War era, and its history and operations are celebrated in these pages of this new mdf book from SAM Publications.