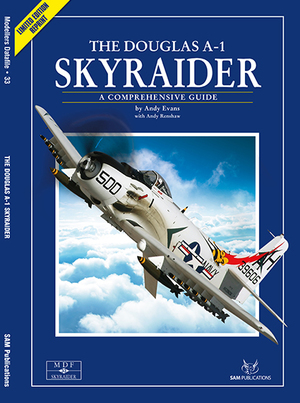 This product was added to our database on Thursday 23 May 2019.

By popular demand SAM is reprinting the Douglas A-1 Skyraider Datafile, with a little updating and a new cover. Some, 3,180 Skyraider's rolled off the Douglas Aircraft Company assembly line, and here the Skyraider story is brought to life. Packed with colour and black and white images, concise text, colour profiles, technical diagrams, scale plans and how to model the Skyraider in popular scales, this reprint is a must have for the enthusiast and modeller alike.

Able to carry a greater payload than a four-engine B-17 Flying Fortress, the single-engine A-1 Skyraider was considered one of the finest attack and close air support aircraft ever built. Skyraider's proved critical during the Korean War and over the jungles of North Vietnam. The airplane that became the AD Skyraider (redesignated A-1 in 1962) evolved from a 1943 Navy decision to combine the dive-bombing and torpedo mission into one aircraft. First flown in 1945, the Skyraider entered US Navy service the following year. Later nicknamed 'Spad' for its 'old-school' design and appearance, reminiscent of the famous World War I aircraft, the Skyraider earned a reputation for ruggedness that not only packed a punch, but also brought back many an airman, despite taking heavy damage from enemy fire. Some AD pilots also trained for an atomic war, practicing long-range flights to deliver nuclear bombs at low altitude. A-1s were also part of the first attacks against North Vietnam following the Tonkin Gulf Incident, and in June 1965, a pair of Skyraider's even shot down a North Vietnamese MiG-17 in air-to-air combat. It was perhaps in the 'Sandy' Combat Search And Rescue role the USAF Skyraider earned most respect, and its heavy payload and long loiter time proved vital in rescue of downed airman in Southeast Asia. The Skyraider was also used by the air forces of South Vietnam, France, Cambodia, Chad and Gabon, and the Royal Navy operated a dedicated airborne early warning version from her aircraft carriers, and the Swedish Air Force used the Skyraider as a target tug. All told, 3,180 Skyraider's rolled off the Douglas Aircraft Company assembly line, and in this new Datafile by Andy Renshaw and Andy Evans; the Skyraider story is brought to life. Packed with many never before seen images, concise text, Colour profiles, technical diagrams, scale plans and how to model the Skyraider in popular scales, this book is a must have for the enthusiast and modeler alike.