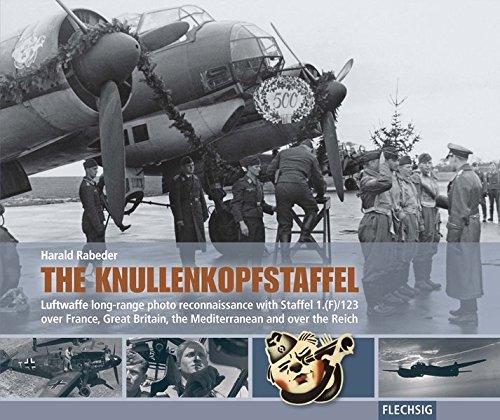 This product was added to our database on Thursday 14 June 2018.

The Knullenkopfstaffel - Luftwaffe long-range photo reconnaissance with Staffel 1.(F)/123 over France, Great Britain, the Meditterranean and over the Reich.

This is the story of the 1st Staffel of Luftwaffe Aufklärungsgruppe (F)/123 from the beginnings in 1935 up to the end of the war in Europe in May, 1945. The reader accompanies the soldiers of the Staffel on their first missions over France and during the Battle of Britain. They experience the tension of the crew during heavy flak fire over Liverpool as well as the dramatic moments during a photoreconnaissance flight over London in autumn 1940. Numerous of the Staffel's missions have been preserved in original reports. In impressive personal accounts, the reader experiences a night photo-reconnaissance sortie, guiding the S-Boats against coastal convoys, reconnaissance over the British landing zones at Dieppe, Bf 109 sweeps over English harbours or even the dropping of a spy over England.Based on German and British documents, the author managed to gain access to the war diary of this extraordinary Luftwaffe Staffel, and consequently provide first-hand information, like personal diaries and logbook records of airmen to illustrate the increasingly hopeless situation of the longrange reconnaissance Staffeln on the Channel front.When the Staffel is relocated to Italy, the losses begin to rise dramatically in hazardous reconnaissance missions over North Africa, Malta and during the invasion of Sicily, and the Staffel is finally disbanded. In early 1945, the Staffel is reformed and the 1.(F)/123 flies long-range jet-reconnaissance with the legendary Ar 234 until the end of the Second World War in Europe.This very well-researched volume is also based on reliable archive material, interviews, detailed mission reports and previously unreleased photographs. 380 B/W photographs,12 maps and 10 colour profiles of the aircraft types flown, thecomplete loss list, award documents and the fate of selected soldiers of the Staffel complete this unique history of the 1.(F)/123 "Knullenkopfstaffel".