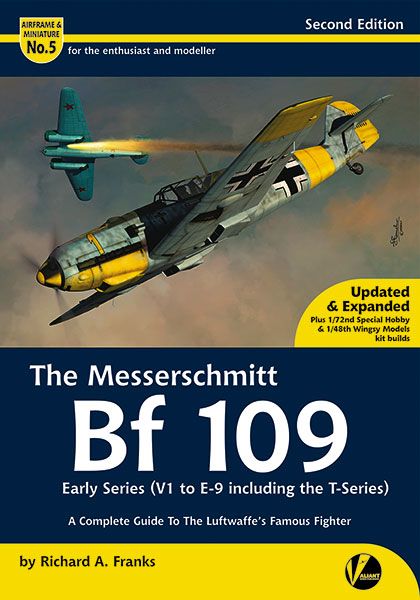 This product was added to our database on Friday 11 March 2022.

Valiant Wings Publishing's next title in the ever-popular Airframe & Miniature series will be an updated, revised and expanded second edition of  The Messerschmitt Bf 109 (Early versions V1 to E-9 including T-series) – A Complete Guide To The Luftwaffe's Famous Fighter by Richard A. Franks.

This fifth book in our much-acclaimed series has been out of print for a while now. With new early Bf 109 kits now available in all scales, plus a mass of associated accessories and decals, it seemed right to make this book available once again.

5+ pages of camouflage and markings

200+ photographs including wartime images Colour side views and four-views by Richard J. Caruana

The extensive build section will be updated with exclusively commissioned builds of the newly-tooled E-series from Wingsy in 1/48th scale by Steve A. Evans as well as the Special Hobby 1/72nd series by Libor Jekl Updated kit, accessory, decal & book appendices