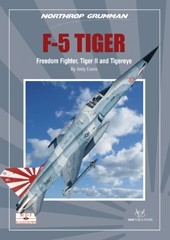 This product was added to our database on Friday 17 february 2017.

Share this product
Also in this series:
9780995546035SAM PublicationsBooks on aviation
Product description

One of the most enduring military aircraft designs ever produced, the F-5 series has served for more than four decades since its initial flight on July 31, 1963. The F-5 remains an agile, highly manoeuvrable, reliable supersonic fighter; lead-in trainer and 'aggressor', combining advanced aerodynamic design, engine performance and low operating costs. More than 2,600 were built by Northrop and with even more built under co-production and licensing agreements with Canada, the Republic of China, the Republic of Korea, Spain and Switzerland. From the F-5's first delivery in 1964 to its final one in 1989, every aircraft has delivered the performance as promised, and approximately two-thirds of the original production F-5's remain operational in twenty-six countries, including the United States.
Being smaller and simpler than contemporaries such as the F-4, the F-5 cost less to both purchase and operate, making it a popular export aircraft. The F-5A 'Freedom Fighter' entered service in the early 1960s, and although the USAF at the time had no acknowledged need for a light fighter, it did procure roughly 1,200 T-38 Talons, which were directly based on the F-5 design. After winning the International Fighter Aircraft competition in 1970, a program aimed at providing effective low-cost fighters to American allies, Northrop introduced the second-generation F-5E 'Tiger II' in 1972. The F-5 was also developed into a dedicated reconnaissance version, the RF-5 'Tigereye' and the ill-fated F-20 'Tigershark'. For the F-5 it has been a fast ride into aviation history!
The story of the F-5 is brought to life in this new MDF Scaled Down from SAM Publications, and the types background; operators, colour schemes and roles are all included, along with colour profiles, technical diagrams and extensive walk arounds. This is a must have book for the enthusiast and modeller alike.