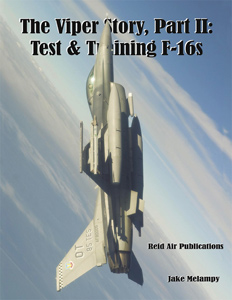 This product was added to our database on Thursday 2 April 2009.

The Viper Story, Part II is at the printers. We're expecting it to return from the printers by February. If you've got an interest in the test squadrons at Nellis, Eglin, or Edwards, or an interest in the training squadrons at Luke, and the Air National Guard, than this book is for you. It also contains coverage of the Aggressor squadrons at Eielson AFB, Alaska, and Nellis AFB, Nevada.
Over 600 high-quality, full-colour images trace the operational history of the F-16 from the early days when the first jet entered USAF service in 1983, right up through 2006-2007 with the latest round of BRAC changes, including coverage of units that no longer fly the F-16. Photos include air-air, combat operations,
mission markings, special/anniversary paint schemes and more. Each unit has a complete squadron history, while each photo is crossreferenced with a database at the end of the book.