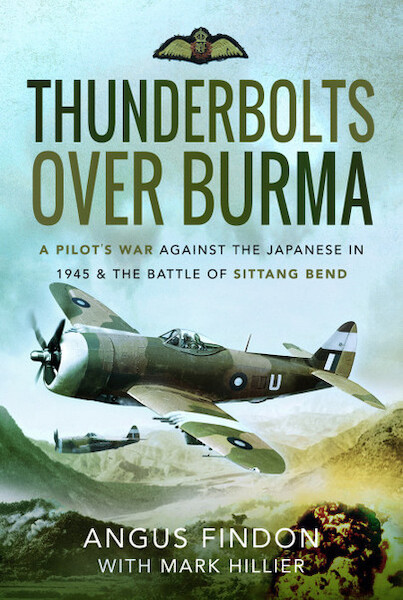 The Republic P-47 proved to be a formidable ground-attack aircraft and in RAF service was especially devastating during the fighting in Burma in 1945. There, the Thunderbolt was deployed using the 'cab rank' system that proved so effective for the Hawker Typhoons during the Battle for Normandy. Flying standing patrols close to the front line, as and when they were needed the Thunderbolts would be directed to specific targets by ground controllers deployed among the Army units in contact with the enemy. The effects of the aerial bombardment the Thunderbolts unleashed was all too often devastating.

Though he only joined 34 Squadron in 1945, Angus Findon quickly found himself embroiled in the last battles of the Second World War – as the many entries in his pilot's logbook testify. In particular, he and his fellow Thunderbolt pilots, often operating alongside RAF Spitfires, played a vital part in the Battle of the Sittang Bend.

On 2 July 1945, a Gurkha patrol ambushed a small enemy unit and captured a despatch bag containing a copy of the operational plan for a break-out that the Japanese Army was planning. Forewarned, the Allies were ready when the enemy attack came.

So swift and destructive was the RAF response, that the breakout ended in disaster for the Japanese who suffered such severe losses that some formations were wiped out. The Battle of Sittang Bend effectively brought the war in Burma to an end.

In his remarkable memoir, never previously published and supported here by additional narrative from the aviation historian Mark Hillier, Angus Findon details not only his part in the Allied victory from his initial training, but graphically recounts what it was like to fly the Thunderbolt and operate in the harsh conditions of the Burmese airfields during the final months of the Second World War.