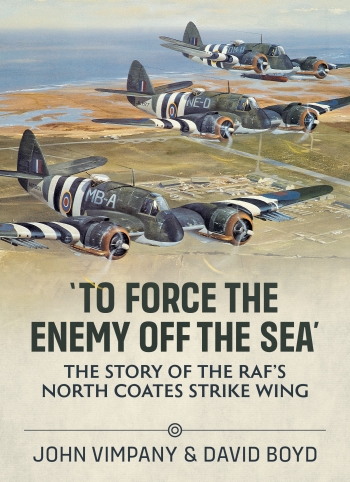 To Force The Enemy Off The Sea: The Story of the RAF's North Coates Strike Wing

This is the story of the RAF anti-shipping Strike Wing based at North Coates in Lincolnshire, whose Beaufighters from 1943 attacked heavily defended German convoys transporting raw materials to Rotterdam.  During a little-known but hard-fought two-year campaign, the Wing succeeded in forcing the enemy's ships off the sea.

From the outset of the Second World War, it was clear that the supply of raw materials, in particular high grade iron ore from Scandinavia, would form a crucial element in Germany's ability to maintain its armaments production.  It was not until early 1943, however, after three years of heavy losses of aircraft and crews, that the RAF implemented an effective offensive capability against the heavily defended shipping convoys carrying iron ore and other raw materials into German-controlled ports.

This volume sets out the strategic challenge the RAF faced in the North Sea and describes the piecemeal and costly response effected during the first three years of the conflict when other threats and theatres claimed a higher strategic priority. It also explains changes in strategy and tactics introduced through the course of 1942 and chronicles many of the big Strikes and other operations launched by North Coates  from April 1943 onwards. Moreover, the 'balance sheet', examination of the anti-shipping campaign performance in general, and the North Coates Strike Wing in particular – vessels sunk, crews lost and the wider strategic impact are examined.

Most controversially, the authors suggest that Britain missed an important strategic opportunity in 1942. A larger, earlier deployment of Strike Wings, diverting even a small proportion of the enormous resources allocated to Bomber Command's bombing of German cities, might have had a greater impact on the Third Reich's industrial production and with fewer aircrew losses and none of the moral ambiguity associated with that controversial campaign.