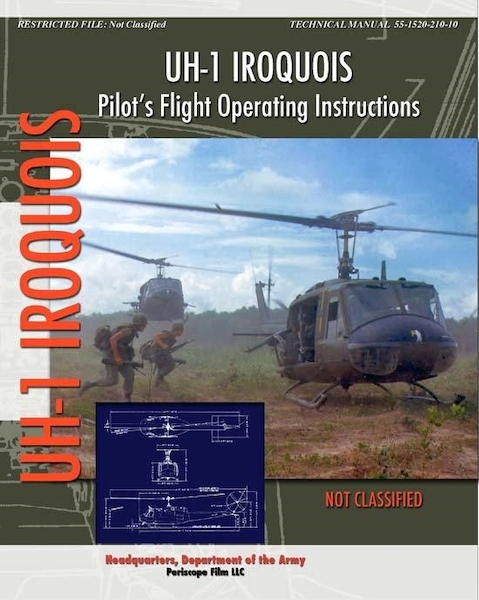 Developed by Bell in the early 1950s, the UH-1 Iroquois was the first turbine-powered helicopter to enter production for the U.S. military. Originally designated the HU-1A for "Helicopter Utility", it was quickly nick-named the "Huey", a moniker that stuck even after the aircraft was reclassified UH-1 in 1962. Designed as a medical evacuation, trans- port and utility helicopter, the UH-1 was extraordinarily successful with more than 16,000 built. The XH-40 prototype flew in 1956, production commenced in 1959, and by 1962 the Huey entered combat service with the 57th Medical Detachment in S.E. Asia.

The UH-1's history in combat includes a long and meritorious service in Vietnam, where its distinctive airframe and two-blade teetering rotor came to symbolize the concept of air mobility. Hueys of various configuration flew in a wide variety of roles, and were modified as cargo carriers, search and rescue platforms, gunships and for reconnaissance and electronic warfare missions. Of over 7000 UH-1s to serve in Vietnam, an astonishing 3305 were destroyed including some of the last American aircraft lost in the war, the Hueys used to evacuate the U.S.Embassy in Saigon at war's end.

In addition to Army service, UH-1s flew for the U.S. Air Force and U.S. Navy as well as for air forces around the world. With the introduction of the UH-60 Black Hawk the UH-1 was phased out of the U.S. Army fleet by 2004, although residual aircraft continue tofly with the National Guard. Originally created by Bell and the U.S. Army, this pilot's manual contains technical, operational and emergency information for the UH-1H/V model Huey.