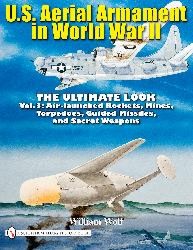 This product was added to our database on Thursday 10 March 2011.

Share this product
9780764336584SchifferBooks on aviation / WW2 US
Product description