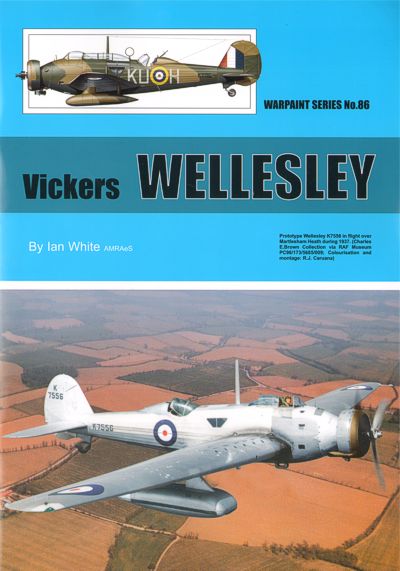 Vickers Wellesley (Hall Park WS-86)
€ 18.30
€ 14.63
NL incl. VAT € 15.95
Save 20.1%
Reduced shipping charge may be applicable depending on country of destination and contents of shopping cart. Will be shown before checkout.Add to cart

This product was added to our database on Wednesday 23 November 2011.

Share this product
Also in this series:
WS-86Hall ParkBooks on aviation
Product description

Vickers Wellesley by Ian White. Created on the drawing board s of the Vickers (Aviation) Company by Barnes Wallis using the geodetic form of construction he devised for Britain's R.100 airship, the Wellesley was designed to fulfil an Air Ministry specification for a reliable, general purpose bomber and torpedo-bomber, that was required to carry a heavy load over long distances. Originally conceived as a biplane, but converted to an all-metal geodetic monoplane by Barnes Wallis, and powered by the highly reliable Pegasus radial engine, the Wellesley was built in reasonable quantities to begin the re-equipment the embryo Bomber Command in 1937. Following testing at Martlesham Heath, the first production Wellesleys were delivered to the RAF early in 1937 and within one year formed the equipment of six UK squadrons. The Wellesley's flying qualities were such that it was chosen to equip the RAF's Long Range Development Unit, under whose guise it undertook a record breaking flight from Cranwell to the Persian Gulf and back to Ismailia in July 1938 and a second from Ismailia to Darwin, Australia, the following November, when the aircraft covered a distance of 7,157 miles without refuelling. By the outbreak of war the Wellesley was rendered obsolete in the European theatre, but was supplied in large numbers to re-equip the RAF's squadrons in the Middle East and East Africa.
It was in the latter theatre that the aircraft showed its true metal. Supported by dedicated ground crews and the ever reliable Pegasus engine, the Wellesleys of Nos.14, 47 and 223 Squadrons battled the Italian Regia Aeronautica and the Italian Army in the Sudan, Abyssinia, Eritrea, Somaliland the Red Sea from June 1940 to November 1942. Despite being decidedly obsolete by the early months of 1943, the Wellesley was employed on transport, anti-submarine and convoy protection duties in the Eastern Mediterranean until March of that year, when the small number that remained were finally retired.