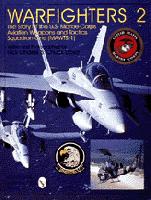 Warfighters II, The story of the USMC Aviation Weapons and Tactics Squadron MAWTS-1

This product was added to our database on Saturday 1 January 2000.

Product description
In this second installment in the Warfighters series, author/photographers Rich Llinares and Chuck Lloyd provide an in-depth look at the United States Marine Corps aviation organization and its specialized training unit the Marine Weapons and Tactics Squadron One (MAWTS-1). The squadron, located at Marine Corps Air Station Yuma, Arizona, trains both fixed and rotary wind aircrews in the "Six Functions of Marine Ari." Twice a year, the fines aviators in the Marine Corps attend the intense WEapons and Tactics Insturctor (WTI) course under the direction of some of the best pilots in the world. Take to the skies over the Arizona desert in the Marines most advanced aircraft. Join the amazing AV-8B Harrier vertical short/takeoff and landing jet as it conducts close air support missions in support of Marine ground troops. Strap in to the advanced F/A-18 Hornet strike fighter on deep strike escort missions with EA-6B Prowler electronic warfare jets. Join the crews of the rugged KC-130 Hercules while they conduct demanding low altitude aerial refueling missions. Marine aviation is more than just fast jets; over half the Corps aircraft are helicopters. Fly in the massive CH-53 Stallion helicopter on air combat maneuvering training missions against the Marine Corps dedicated adversary tactics squadron, the Snipers in their nimble F-5E Tiger II jets. Get down low in the weeds with Marine CH-46E and UH-1N helicopters as they conduct assault support missions with the devastating AH-1W Cobra gunship. Through extensive research, and access to many of the key personnel, both past and present, the authors tell the complete story of Marine aviation and how it serves America's 911 force - the U.S. Marine Corps. In rich detailed text and spectacular full color photos the history of this amazing military organization is described along with its force structure and air wings. Hear directly from the Marines who planned and executed the daring rescue of USAF Captain Scott O'Grady from war torn Bosnia. Take a first hand look at how the unique MAWTS-1 unit teaches Marine airmen to be experts in their aircraft and missions. Warfighters 2 also contains a first hand look at the unique HMX-1 squadron which fulfills a number of key requirements from flying the President to conducting the operations test and evaluation of all rotary aircraft flown in the Marine Corps. Each of the aircraft operated by the Marines are examined through words and pictures. Join the aviation combat element of the few, the proud, the Marines - the first to fight the last to leave.