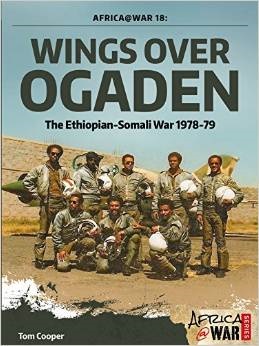 Share this product
Also in this series:
9781909982383Helion & CompanyBooks on aviation / War in Africa
Product description

With Ethiopia in disarray following a period of severe internal unrest and the spread of insurgencies in Eritrea and Tigray, Ethiopia and its armed forces should have offered little opposition to well-equipped Somali armed forces which were unleashed to capture Ogaden, in July 1977. However, excellently trained pilots of the Ethiopian Air Force took full advantage of their US-made equipment, primarily their few brand-new Northrop F-5E Tiger II fighter-bombers, to take the fight to their opponents, win air superiority over the battlefield, and thus have their hands free to interdict the Somali supply links to stop the invasion cold.

This air victory practically sealed the fate of the Somali juggernaut in Ogaden, especially so once Ethiopia convinced Cuba and the Soviet Bloc to support her instead of Somalia. In a fit of pique, Somalia forced all Soviet advisers to leave the country. Already bitter over similar experiences in Egypt in 1972, Moscow's revenge was designed as a clear message: nobody was to treat her in such fashion again. The USSR subsequently launched an air bridge to Ethiopia, unique and unprecedented in its extension and importance, delivering huge quantities of armament and equipment necessary for the Ethiopians to reconquer Ogaden, and beyond. In turn Somalia asked the USA for help and thus occurred an unprecedented switch of Cold War alliances.

This volume details the history and training of both Ethiopian and Somali air forces, their equipment and training, tactics used and kills claimed, against the backdrop of the flow of the Ogaden war. It explains in detail, supported by over 100 contemporary and exclusive photographs, maps and color profiles, how the Ethiopian Air Force won the decisive victory in the air by expertly deploying the F-5Es - unequaled in maneuverability, small size and powerful armament - to practically destroy the Somali Air Force and its MiG-17s and MiG-21s.