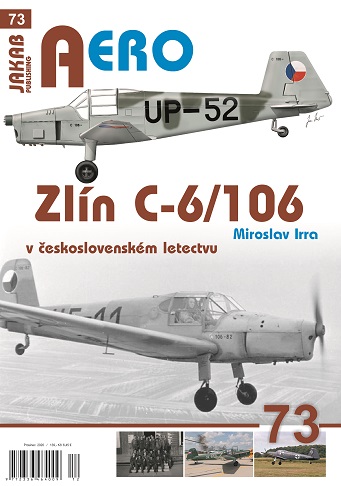 Zlin C-6/C106 v Ceskoslovenskķm letectvu /Zlin C6/C106 in Czechoslovak Service (Jiri Jakab 9788076480261)
€ 8.21
NL incl. VAT € 8.95
Reduced shipping charge may be applicable depending on country of destination and contents of shopping cart. Will be shown before checkout.Add to cart

This product was added to our database on Tuesday 15 December 2020.

Share this product
Also in this series:
9788076480261Jiri JakabBooks on aviation
Product description

The German elementary training aircraft B³cker B³ 181 "Bestmann", manufactured in Czechoslovakia during the war for the Luftwaffe and after the war for our air force under the designation ZlĒn C-6/106, is another of the legends of the post-war construction of Czechoslovakia. air force. Until the beginning of the 1950s, over a thousand young pilots were taught the basics of aeronautical crafts at the Aviation School, and in 1949-1950 he also served in elementary training for half of the last inaugural year of the LVA. In addition, it was operated by other Czechoslovak units. Air Force, where he was used to test pilots, instrument training, acrobatics training, courier flights, etc. His career in the military air force lasted about the same as in the case of his corporate colleague B³ 131, but both of these types have become inseparable legends in Czechoslovak aviation history. Those who started their careers as military pilots are still remembered. No less important is this type for our sports aviation, a large part of the local post-war production was delivered directly to aeroclubs, where it served as honestly as the military air force. It certainly deserves the memory of aviation fans in the Aero edition as well as its recent predecessor, the Aero C-4/104.

The publication is in A4 format, full-color on high-quality coated paper, V2 binding, 52 pages, a number of color photographs, color side views.