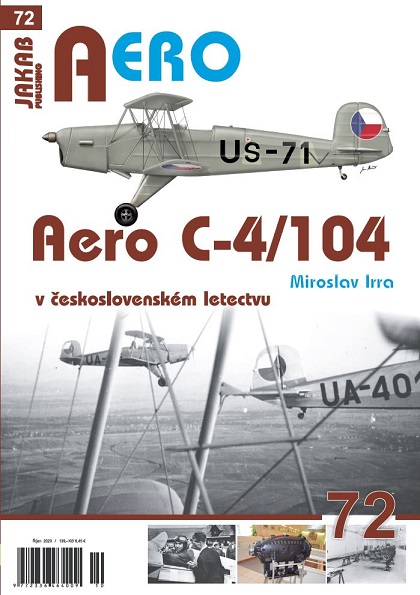 Aero C-4/104 v ?eskoslovenském letectvu /Aero C4/C104 in Czechoslovak Service (Jiri Jakab 9788076480230)
€ 8.21
EU: incl. tax € 8.95
Reduced shipping charge may be applicable depending on country of destination and contents of shopping cart. Will be shown before checkout.Add to cart

This product was added to our database on Friday 9 October 2020.

Czechoslovak unlicensed copy of the German elementary training aircraft Bücker Bü 131 "Jungman", manufactured under the designation Aero C-4/104 and known in our country under the nickname "Bikr", is one of the legends of the post-war construction of Czechoslovakia. air force. Until the summer of 1951, the basics of aviation craft were taught in the LVA for min. 300 pilots - future officers, most of whom strengthened the staff of the Czechoslovak command corps. Air Force at the time of its massive construction in 1951-1953. It should be noted, however, that many were found politically unsatisfactory after February 1948 and subjected to persecution from expulsion from the army to imprisonment after fabricated trials. In addition, Bikr served with the LU in the training of pilots - non-commissioned officers, training squadrons and air regiments, where he was used to test pilots, training in flying according to instruments, acrobatics training, courier flights, etc. Bikr's career in the Air Force lasted only about eight years. but those who began his career as a military pilot on it are still remembered. Even then, he still provided many beautiful experiences to the sports pilots of Svazarm, where the remaining aircraft were handed over after 1950. Many still remember flying the "Biker" today, the wind whipping in the face as in the famous fighters of World War I. Many others still regret that they did not have time to fly with him. Let us therefore recall the service of "Bikra", this biplane relic of the "golden era of aviation" in Czechoslovakia. Air Force, too. The publication is in A4 format, full-color on high-quality coated paper, V2 binding, 52 pages, a number of color photographs, color side views.