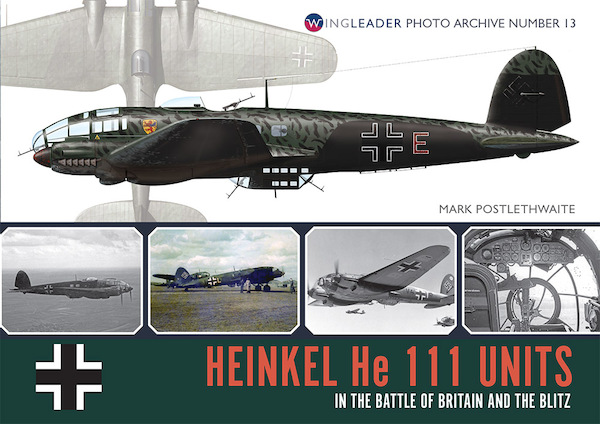 This product was added to our database on Tuesday 25 January 2022.

We always planned to do Luftwaffe bombers in this series but never imagined that we'd have enough photos to do them individually. However, after consulting Chris Goss whose Luftwaffe photo collection continues to grow on a daily basis, we realised that the Heinkel He 111 was now more than achievable.

We decided to restrict the book to operations over the UK as the Russian and Mediterranean Theatres could probably be covered in a separate volume. We've also included the early war operations over England as these produced some of the best photographs of the captured Heinkels.

The photos are arranged by Kampfgeschwader Gruppes and we've included a panel for each Gruppe with a list of official code letters and colours of each staffel, (the individual aircraft letter represented by an X). Also included are the usual detail pages where we focus on one particular aspect such as grenade launchers, formation markings and the differences between the P and H series.

747-B Den Story Vikingen: Huge Viking: The Story of the 747 in Scandinavian Service