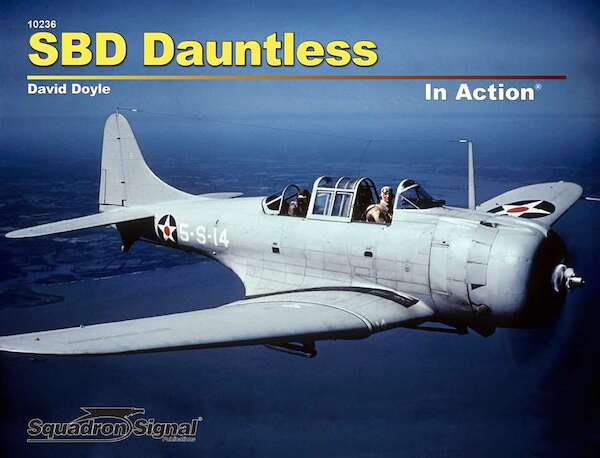 This product was added to our database on Wednesday 5 August 2015.

Share this product
Also in this series:
9780897477734SquadronBooks on aviation
Product description

The Douglas SBD ('Scout Bomber Douglas') Dauntless was the U.S. Navy's chief carrier-borne scout plane and dive bomber from the middle of 1940 until the middle of 1944. In addition, U.S. Marine units flew the Dauntless from aircraft carriers and bases on land, and the U.S. Army Air Force also operated its own version of the plane. Most remembered for the deadly blows it inflicted on Japanese aircraft carriers at the battle of Midway in June 1942, the SBD Dauntless boasted long range, good handling, and toughness. The land-based Army version of the aircraft, which omitted the arrestor hook, was dubbed the A-24 Banshee. Though design work on the Dauntless began in the mid-1930s, Germany's impressive use of Stuka dive bombers at the start of the war in Europe further brought home the need for an effective dive bomber in U.S. service. The Dauntless SBD-2 version saw combat from the very first day of the war for the United States, two of the aircraft being destroyed at Pearl Harbor on 7 December 1941. Other SBD-2s took part in combat through the Battle of Midway in 1942. Truly combat capable, the SBD-3 saw action – and considerable success – at the Battle of the Coral Sea, Midway, and the Eastern Solomon Islands. In the Atlantic it took part in Operation Torch. Becoming operational in late 1942, the SBD-4 served aboard the USS Independence at Marcus, Wake, and Tarawa late in 1943. Meanwhile the U.S. Army Air Force made use of its version of the aircraft – the A-24A Banshee, first deployed in June of 1941. U.S. allies France, beginning in 1943, and Mexico, starting in 1944, also received the A-24B model. Lavishly illustrated with 200 photos, detailed line drawings and color profiles. 80 pages