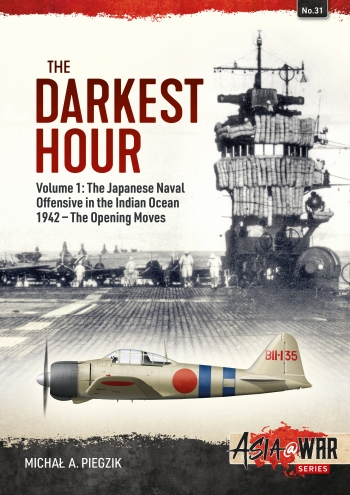 The Darkest Hour Volume 1: The Japanese Naval Offensive in the Indian Ocean 1942 - The Opening Moves

The Darkest Hour presents the Imperial Japanese Navy offensive in the Indian Ocean area in March–April 1942, the main goal of which was to destroy the Royal Navy in the Far East and achieve domination on the western flank of the Pacific War on the eve of the Battle of Midway. The bold operation by two Japanese task forces (Kid? Butai and Malay Force) in the Indian Ocean would only be possible with the fall of Singapore in February and the Dutch East Indies in early March 1942.

Volume 1 of The Darkest Hour describes the strategic planning and opening moves of both sides in February–March 1942, including the Japanese navy projections on the final steps of the first stage of the Pacific War, and the Royal Navy's hopes to halt the enemy advance without taking any significant risks. The Japanese offensive in the Indian Ocean began in March 1942 with the invasion of the Andaman Islands and Christmas Island. By securing both vital positions, the Japanese navy planned to establish its advanced bases in the eastern part of the Bay of Bengal.

In the next step, the invincible Kid? Butai consisting of five aircraft carriers and their escorts, was expected to crush the British bases on Ceylon and once and forever destroy the main core of the Eastern Fleet. The chaos provoked by the Kid? Butai would then become a great opportunity for the Malay Force to cut off the British shipping routes in the western part of the Bay of Bengal.

The Darkest Hour is the first systematic attempt to describe this less-well known part of the Pacific War by researching both British and Japanese archive documents and other sources published in many countries, including the United Kingdom, Japan, and India. The first volume examines events up to the capture of the Andaman Islands and Christmas Island in early March 1942, and is extensively illustrated with photographs and colour artworks of the ships, aircraft and men involved.