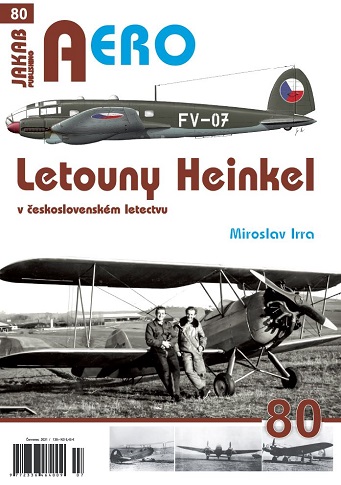 This product was added to our database on Sunday 11 july 2021.

Aafter the war, the Czechoslovak Air Force registered three Heinkel products - He 72, He 111 and He 219, in the case of He 111 and He 219 in the number of only a few pieces, the number of He 72 exceeded ten. All our He 72 were owned by Czechoslovakia. military administrations, but were lent to aeroclubs. Aeroclubs used them mainly to tow gliders and in this role they earned recognition and considerable popularity. He had no Czechoslovak He 111 aircraft. military administration in the first post-war years interest. However, the initiative to use them came from VLÚ Let?any. After the war, this institution dealt with dozens of research, testing and production tasks, including tests of a " rocket remote-controlled aircraft torpedo",ie controlled aircraft missiles Henschel Hs 293A, tests of trophy jet engines BMW 003 and Jumo 004, tests of bombing equipment and test bombing, including tests of controlled bombs PC 1400Fx Fritz X. It was necessary to have a suitable aircraft. Two machines were obtained from Bulgaria, the third machine coming from the spoils of war was taken over on April 26-28, 1950 by the military administration after a revision at the Rudý Letov plant. Two aircraft were used in LVÚ in 1948-49 for various tests, one was modified for flight tests of jet engines Jumo 004 and BMW 003 In 1950, one (perhaps two?) He 111 was modified for aerial photography and handed over to the Photolete Group, where it flew in 1957. Provenly, two machines were used in 1952 - 1953 to tow tow targets for shooting S-102 fighters. Both were abolished during the years 1953-195 The MNO showed interest in He 219 only in 1948, when it announced to the Rudý Letov factory the intention to order the repair of two pieces of material located in Cheb. Rudý Letov began assembling two aircraft, the first was flown on February 25, 1950, the second aircraft, which was to be adapted for the installation of a jet engine, was still being worked on at the time. Efforts to use them were quite fruitless, both were abolished around the beginning of 1953.< Full color on high quality coated paper, V2 binding, 52 pages, many color photos, color side views.