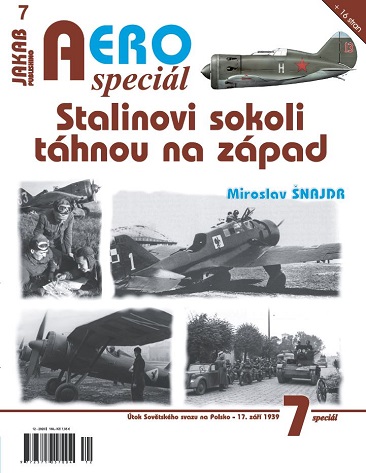 This product was added to our database on Tuesday 15 December 2020.

Share this product
Also in this series:
9788076480278Jiri JakabBooks on aviation
Product description

World War II in Europe broke out on September 1, 1939 with Hitler's Nazi Germany attacking neighboring Poland. The German army, effectively supported by the Luftwaffe from the air, presented the first demonstration of its Blitzkrieg in the following days. On September 3, Great Britain and France formally entered the match. Although the two Western European democracies declared war on Germany, their armed forces did virtually nothing to save their eastern ally. The Polish army, left behind, was bleeding and retreating to the east. The command hoped that it would be able to take a firm defense on the eastern bank of the Vistula, in which it would remain until the eagerly awaited offensive of the Franco-British troops on the Western Front. But then literally lightning struck the Poles. On September 17, the Soviet Union also joined the attack on Poland, turning the idea of ??a possible defense east of the Vistula into a mere piece of paper. The shocked Polish Ambassador W. Grzybowski was called to the People's Commissariat of Foreign Affairs in Moscow early that morning and informed Deputy People's Commissar Potemkin that the Polish state had virtually ceased to exist, ending the Polish-USSR treaties and the Red Army entering eastern Poland. "To protect the fraternal Belarusian and Ukrainian populations." Although the Red Army's campaign against Poland is sometimes downplayed, it was in fact an extraordinarily large-scale military operation that significantly changed the situation in Eastern Europe, redrawn state borders and fundamentally shifted Stalin's empire to the west. After more than half a century of the Soviet Union's existence, the fact of aggression against collapsing Poland was hidden under a cloak of secrecy and lies. And even today, a significant number of Russians are convinced of the legitimacy of this step, and even in current publications, the attack is euphemistically called the "liberation march." The publication has an expanded content of 16 pages to 68 pages, format 297 x 230 mm, a number of photographs, color side views

Unfortunately in Czech but many inetersting photo's and technical drawings