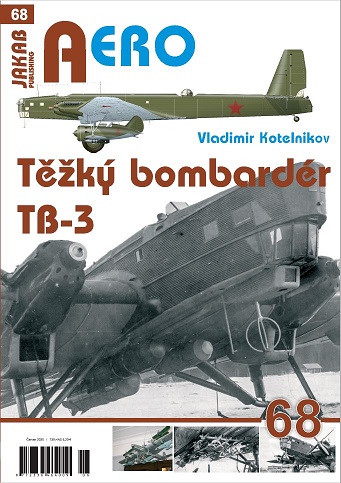 This product was added to our database on Thursday 11 June 2020.

Share this product
Also in this series:
9788076480Jiri JakabBooks on aviation
Product description

In 1925, the Special Technical Office of Military Research (Ost?chbjuro, OTB) assigned the task of the Central Aerodynamics and Hydrodynamics Institute (CAGI) to begin the development of the T1-4RT3 four-engine Wright T-3 engine. The first layout drawing of the aircraft, to which CAGI assigned the designation ANT-6, was completed in early 1927. It was an all-metal self-supporting low-flying aircraft with a wing with a large profile thickness and a corrugated sheet metal coating. At the time, the aircraft was a real giant - only the wheels of the main landing gear had a diameter of two meters. The prototype began to be built in the CAGI workshops in October 1929. In the VVS documents, it belonged to the designation TB-3. By February 20, 1931, the TB-3 had risen ten times - the aircraft was being repaired and refined more than it flew. The model machine of plant No. 22 (? 2201) had its flight premiere on February 27, 1932, the second piece produced followed on March 25. They managed to build the first, ten-piece series in Fila by April 28, so that the planes could take part in the May Day parade in Moscow. In the second half of the 1930s, the VVS had the largest strategic bomber air force in the world. By the end of the 1930s, however, the machine was hopelessly obsolete. As of February 1, 1940, there were 509 TB-3s in the ranks of the VVS, 100 of which were not operational. They served, for example, as bombers, airborne, transport, fighter carriers. The publication describes all versions and participation in various conflicts, including II. World War II, where they played a very interesting role